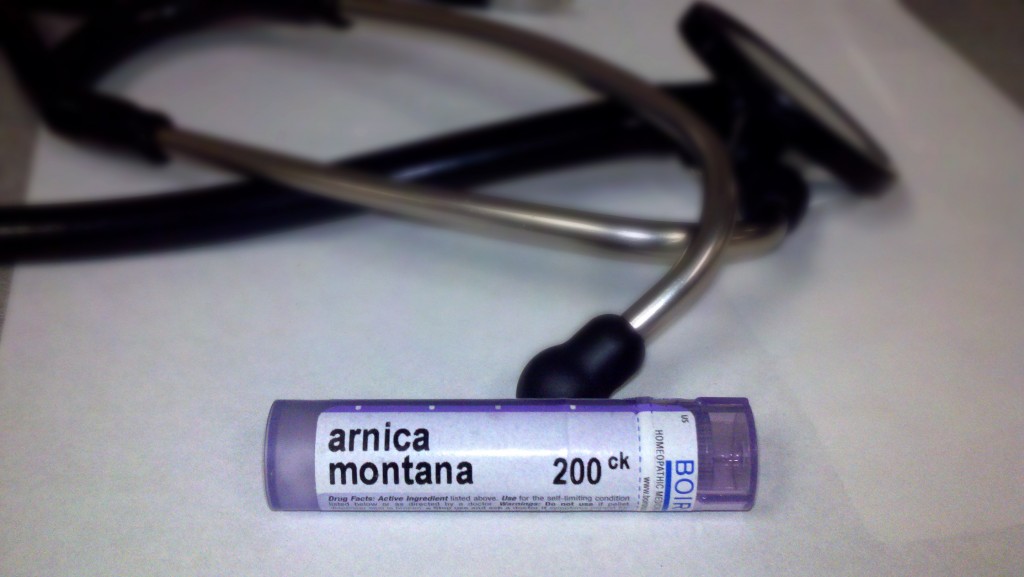 Another believer. They left urgent care, and were headed to the local Whole Foods Market to pick up some Arnica 200C.  The 13 year-old boy had jammed his finger playing basketball yesterday. His finger was swollen, and a little bruised around the PIP joint, (the first joint in the finger).  It was hard to flex his finger with the swelling. The xray showed no fracture. I gave him a couple Arnica tablets on the tongue, put on a splint, and explained to him and his father that if it is going to help, it should do so within the next half hour. He could also take some Ibuprofen if desired. 5 minutes later he pulls the splint off and can almost make a fist, and states that the finger doesn’t feel as sore now.

Wow. There’s nothing like the power of energetic medicine. It works whether you  believe in it or not. Since you are not waiting for it to enter the bloodstream via the stomach, it can act remarkable fast, and with no side effects. Homeopathy works under the idea that “like cures like”. Arnica montana has the “feeling” or energy of: hit, bruised, swollen, and don’t touch me. So if you have the same feeling whether from being rear-ended in a car accident, falling off your bicycle, hitting your thumb accidently with a hammer, or hitting it with a basketball, etc. Arnica is a first-aid treatment that can actually help the body heal itself. It doesn’t just cover-up the pain. I recently recommended it to a marathon runner. After pounding the pavement for 26 miles the front of his thighs are especially sore. After his last marathon he took some Arnica. He called me later the same day to say how effective it was in reducing the soreness and speeding-up the healing. Now they it is part of their training kit.

Finally some modern scientists are taking homeopathy very seriously. Healers throughout history have known this basic principle of “like cures like”. Hippocrates (460 – 350B.C.), regarded as the “father of medicine,” who authored the Hippocratic oath, wrote, “By similar things a disease is produced and through the application of the like is cured.” Aristotle (384 – 322B.C.) knew the principle as well, and wrote, “Often the simile acts upon the simile.” Or, as Dr. Samuel Hahnemann said, “Like cures like,” (or traditionally in Latin, “Similia similibus curentur”).

Dear All, In an enthusiastic effort to resurrect the Homeopathic Association of Arizona and reach out to other interested Homeopathic professionals, we are inviting you to participate in our membership drive. We … END_OF_DOCUMENT_TOKEN_TO_BE_REPLACED

A quick Google search of “homeopathy” will lead you to at least one webpage that will attempt to convince you homeopathy is not worthwhile because it is “implausible”. This argument is problematic for at least two … END_OF_DOCUMENT_TOKEN_TO_BE_REPLACED