You are here: Home / General Homeopathy / A science fiction story with a different ending? 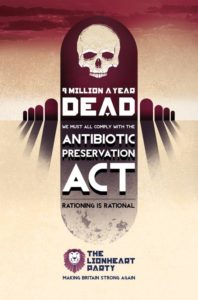 It has been said that science fiction can often predict the future correctly. A dark new comic book written by British filmmaker Sara Kenney and published in the US has recently been launched that explores a world without antibiotics. Here is an excerpt from a recent review published by National Geographic:

“In a hospital, a female surgeon snarls at a male supervisor. ‘I’m sick of being told how I should treat my patients. First we’re told to cut antibiotic prescriptions by 50 percent. And next the government locks up the antibiotics and controls their use?’

The place is London. The year is 2036. And the story of Surgeon X—a monthly graphic novel written by British filmmaker Sara Kenney and published by U.S.-based Image Comics—is off to a gritty, gory, swear-y start.

At the center of the story is Rosa Scott: young, talented, sick of bureaucrats, and sick at heart over the mysterious death of her mother, a microbiologist who was looking for new antibiotic compounds out in the wild. Working around her distinguished surgeon father and microbiologist twin sister, and recruiting her schizophrenic brother to help, she builds a secret outlaw clinic to save those whom society won’t protect—and, maybe, loses herself in the process.

‘I now believe life is a privilege, not a right,’ Scott thinks in the first chapter. ‘As a doctor, this scares the s— out of me.’

Surgeon X, which began publishing in September on paper and online—its second issue is just out—is an intense, dark drama set inside a thought experiment. It takes place in a world where the worst predictions of the rise of resistant bacteria have come true: Antibiotics have run out of usefulness, millions are dying of simple infections, and hospitals have become death traps. A repressive government has cracked down to save the few drugs that remain—and, to decide who gets them, has introduced a ‘Productivity Contribution Index’ that downvotes anyone unhealthy, marginalized, or poor”.

Back in July 2016, the Homeopathy Association of Arizona published an article on the post-antibiotic era that was a response to the dreaded discovery in a US hospital of a bacterium that is resistant to all known antibiotics. The article mentioned that the problem of antibiotic-resistant bacteria has been driven by over-prescribing along with patient demand. Solutions proposed at the time therefore included the reduction of antibiotic prescriptions by clinicians as well as education of the public.

Since then, this problem has been recognized as so serious that the United Nations General Assembly held an emergency meeting and it has also even been discussed at international economic summits such as the G7 and G20. The British government released a series of reports on a two-year study and in the US, new initiatives have been launched to revive development of new drugs. New antibiotics are great for the bottom line of the pharmaceutical industry, but common sense tells us this is not a viable solution and will at best merely kick the problem down the road.

While it might be exaggerated, the inevitable result of this “solution” is starkly described in Surgeon X. But is this really inevitable? Studies are increasingly demonstrating that homeopathy has outcomes that are at least as effective as antibiotics for many conditions. Some of these have been reported in other articles on this website and more can be found in links found in these articles.

We can choose to live in a world that does not resemble the one described in Surgeon X. Those of us who practice and use homeopathy know that antibiotics can frequently be avoided with the use of homeopathic remedies. But the scientific and medical communities need more research in order to be convinced. We owe it to our fellow humans to broadcast frequently and far and wide that there is another route that must be explored now!

Dear All, In an enthusiastic effort to resurrect the Homeopathic Association of Arizona and reach out to other interested Homeopathic professionals, we are inviting you to participate in our membership drive. We … END_OF_DOCUMENT_TOKEN_TO_BE_REPLACED

A quick Google search of “homeopathy” will lead you to at least one webpage that will attempt to convince you homeopathy is not worthwhile because it is “implausible”. This argument is problematic for at least two … END_OF_DOCUMENT_TOKEN_TO_BE_REPLACED